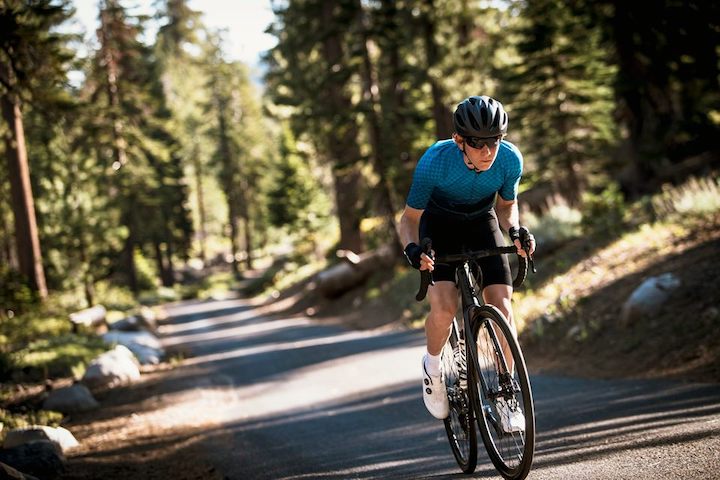 They may be the biggest, mass-producing bike manufacturer on the planet, but that doesn’t stop Giant from continually pumping out top-quality and exciting new machines. The Contend SL is just one of the latest in Giant’s long list of awesome bikes, replacing the old aluminium Defy with a bicycle which boasts even better performance and greater value for money.

Since their inception in 1972, Giant have grown and grown to a point where they’re now – quite literally – the giants of the bicycle manufacturing industry. They’ve created a number of iconic models over the past few decades, from dedicated road machines to mud-slinging mountain bikes.

They even went and won the 100th edition of the famous Giro d’Italia with the top of the range, super-versatile TCR Advanced, that year under the control of Tom Dumoulin. Their race-winning pedigree is clear for all to see, but what about their entry-level bikes, aimed at us hobbyists rather than fully-fledged Grand Tour contenders?

Well, Giant tick the box there as well. Over the past decade they’ve designed and manufactured some of the best and most well-known entry-level bikes on the market, from their fan-favourite Defy to the new and improved Contend SL.

If you’re looking for a bike that’s built on decades of rigorous testing, possesses race-winning credentials by the bucket load and won’t burn the bank, then a Giant bicycle is probably the one for you.

The Contend SL1 is a sportive rider’s dream, the lightweight ALUXX SL aluminium frame and carbon fork providing unparalleled levels of comfort as well as smooth and confident control – ideal for long days in the saddle.

Built into this comfortable frame is Giant’s unique Balance road geometry which aims to inspire confidence by making the bike a little more agile. This is achieved by adopting a more compact overall frame design, a slightly sloped top tube and smaller frame triangles.

It's not only the frame that gives the Contend SL1 its characteristic comfort; it has been considered when designing the seatpost too. Giant call it Smooth Ride Quality and it has been channelled into their new D-Fuse seatpost, reducing ride shock and any other vibrations from the road.

The Contend is no racer and it never pretends to be. It’s an endurance road bike at heart and Giant have focussed on this very thing throughout the build. Equipped with a compact crankset along with a very large rear cassette, you get the range of gears you’ll need to both scale mountains and speed ahead on the downhills.

The bike’s key touchpoints are also designed with long days in mind, the saddle and bars soaking up all the chatter from the road below to make for a smooth and comfortable ride.

The Contend SL2 takes the SL1 and steps it up a notch, throwing in a Shimano Tiagra groupset and the option of disc brakes. The hydraulic disc brakes are made in house and are among the most reliable and most powerful sets of discs on the market.

A Tiagra groupset is a quality upgrade, especially for those of you looking to race your new Contend SL2 at a local crit or timed sportive event. It offers super crisp shifting and with an extra sprocket on the block, the transitions between each gear are a little smaller, making for smoother and more efficient shifting.

Aside from these upgrades, the Contend SL2 is almost identical to the SL1, adopting the same comfortable frame design and unique, endurance-optimised geometry.

Does the Giant Contend sound like the kind of bike for you? If so, be sure to view our entire range online. Or, if you’re still on the fence, why not come down to one of our stores and try it out for yourself – we’re certain you’ll love it.